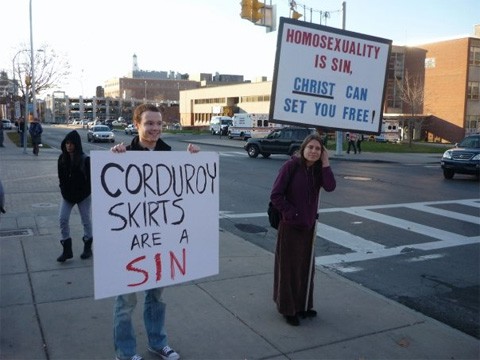 Chris Pesto, a junior drama major at Syracuse University, felt uncomfortable when he saw Open-Air Campaigner evangelist Michelle Deferio standing on campus with her anti-gay sign, so he decided to create a bit of his own drama:

Writes Pesto: "This woman was wearing a ankle-length corduroy skirt, which, as we all know, is a fashion nono. So, in order to make her feel uncomfortable, I stood next to her and held a sign that said Corduroy skirts are a sin! I don’t think I have ever drawn so much attention in my life. SO many people asked to take a picture with me, I got laughs, high fives and there were the few that even cursed off the woman standing behind me.

As I drew interest to what was going on with myself and the woman with the hateful sign, I started to draw a crowd that stood with me in support. Before I knew it I had 100+ people holding signs for gay rights asking people to honk their horns to support. I was interviewed by a news station, and more than 5 student organization papers, and the post standard of syracuse."