In an interview with Entertainment Weekly, Adam Lambert discusses the OUT magazine controversy that erupted earlier this week when editor Aaron Hicklin ripped Lambert and his handlers in an editor's letter for wanting to avoid being perceived as "too gay" in his interview or cover shot for the OUT 100. 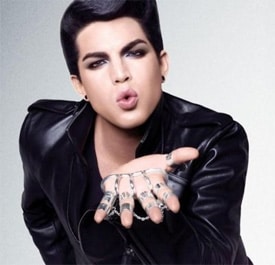 Lambert says he's responsible for managing his own image and that Hicklin "crossed a line" with the letter:

"I’m not being puppeted around. I didn’t want to jump onto a gay magazine as my first thing, because I feel like that’s putting myself in a box and limiting myself. It was my desire to stay away from talking about certain political and civil rights issues because I’m not a politician. I’m an entertainer. That is not my area of expertise. I can talk about relationships and personal experiences because as an artist those things involve writing lyrics and that part of my process. But I didn’t feel comfortable talking about the March on Washington. I didn’t feel comfortable, so I asked my publicist to ask the interviewer to stay away from the political questions. I take full responsibility for that. I think that the editor has his agenda and has his opinions, which I respect, but they’re not necessarily my opinions. And I wish there was a little respect for that. Not every gay man is the same gay man….in order for us to progress,
we need to stop segregating ourselves. And a letter like that, that
viewpoint — the letter that Aaron wrote is holding us back. Because
it’s recognizing the big difference as opposed to letting us all ignore
preference and just be people."

Previous Post: « Chaz Bono: ‘Gender is Between Your Ears, Not Your Legs’
Next Post: DC Agenda Born »