The ACLU has intervened in the case of a lesbian high school student in Alabama whose principal has forbid her from attending prom with her girlfriend: 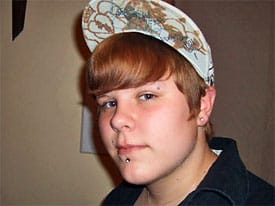 "Cynthia Stewart, a 17-year-old junior at Tharptown High School in
northern Alabama, is a member of her school’s prom planning committee,
had personally raised over $200 for the prom, and created the theme her
classmates had chosen for the dance.  She is also an out lesbian. When Cynthia approached her principal to ask if she could bring her
girlfriend with her to the prom, he said no.  He also made Cynthia
remove a sticker she was wearing that said, 'I am a lesbian,' telling
her, “'You don't have that much freedom of speech at school.' Cynthia’s
aunt and guardian, Kathy Baker, then appealed the principal’s decision
to the school board.  But the board let the decision to bar Cynthia
from bringing her girlfriend to the prom stand."

The school has apparently threatened to cancel the prom for everyone should Stewart bring her girlfriend.