The facial hair trend is getting extracurricular recognition at Olentangy Liberty High School in Ohio: 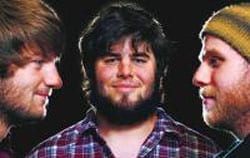 "A dozen students have joined, they said, with two male teachers — both bearded, of course — serving as advisers.

Under a mission statement that emphasizes spreading 'beard awareness and hygiene throughout the school community,' future topics include the history and care of beards, and grooming products. 'Lumberjacks are our icons,' Cole said.

Though far from the norm, according to observers, the guys at Liberty rank among a growing number of adolescents experimenting with facial hair. 'Without a doubt, teens and 'millennials' are starting to use it as a form of expression,' said Aaron Perlut, chairman of the American Mustache Institute in St. Louis — a nonprofit, humor-based 'advocacy' group. 'It's like the new tattoo but less invasive,' said Perlut, 38."