Two movie star Scientologists may soon team up for a remake of Butch Cassidy and the Sundance Kid. Travolta would play Butch: 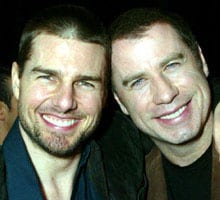 "A source tells The Daily Mirror: 'Butch and Sundance is a labor of love for Tom. He was eight years old when he saw the original and it made an impression that has stayed with him all his life. He can’t wait to get to work.'

Tom hopes to revive the role of Sundance–played by Robert Redford in the original film–while 55-year-old John is expected to play Cassidy.

The 46-year-old star even got the blessing of Paul Newman – who originally played the role of Cassidy in the film about a pair of lovable bank robbers–before he died of lung cancer last September, tattles tell the tab.' It has been a pet project of his that has been on the back-burner for years. But now he’s ready to go, and will most likely happily eschew the enormous salary that he normally commands.'"

Previous Post: « Gay Chelsea Storefront Featuring ‘Live Massage’ Shut Down by NYPD
Next Post: Did Glee‘s Chris Colfer Go Back into the Closet? »