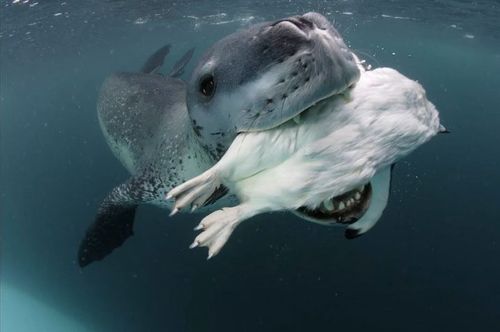 Photographer Paul Nicklen was hesitant about getting in the water with leopard seals in Antarctica as they are fearsome predators, but instead of being threatened by him, the seal adopted him: 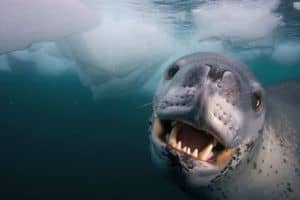 "I slipped into the water, terrified of what might happen, and I swam up to this leopard seal. My legs were shaking and I had dry mouth. Right away she dropped the penguin. She came up to me and she opened her mouth … and her head is twice as wide as a grizzly bear’s head. She’s huge. She took my whole head and my camera inside her head and did this threat display.But then the most remarkable thing happen. She went off and got me a live penguin. She came up and she started to feed me a penguin. She kept letting these live penguins go and the penguin would shoot past me and she’d look disgusted as she go by me. She did this over and over."