If you're gay and you die in Rhode Island your domestic partner won't be able to make funeral arrangements for you because Governor Donald Carcieri just vetoed a bill providing for that. 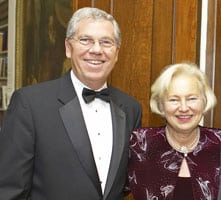 According to Carcieri, "This bill represents a disturbing trend over the past few years of
the incremental erosion of the principles surrounding traditional
marriage, which is not the preferred way to approach this issue. If the General Assembly believes it would like to address the issue
of domestic partnerships, it should place the issue on the ballot and
let the people of the state of Rhode Island decide.''

Carcieri, who is also a strong supporter of the National Organization for Marriage (NOM), recently told the crowd of more than 300 at a fundraiser for the anti-gay group Massachusetts Family Institute that marriage is "not a civil right". Said the governor: "It is a not civil
right. I get aggravated when it is portrayed that way. Marriage is a license by the state. It is about a state’s
responsibility, which is the reason why states don’t allow a lot of
types of marriages."