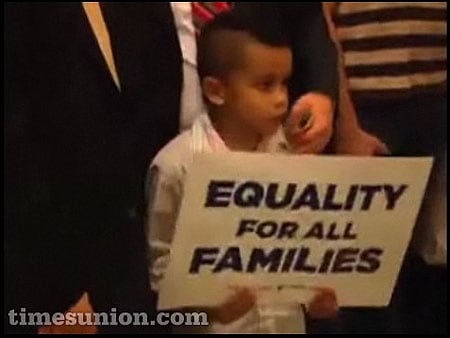 Marriage equality didn't get a vote today, but it wasn't because supporters at the state house in Albany were quiet. As senators made their way to the chamber, they were confronted with advocates shouting "We deserve a vote."

Watch the chaotic scene, AFTER THE JUMP…

The AP is now reporting that Governor Paterson has placed the marriage equality bill on the agenda for special sessions on November 16th and 17th.

According to sources close to the fast-and-furious negotiations thathave been going on all day, the Democrats now have somewhere in theneighborhood of 21 or 22 'yes' votes – far too few for the Republicansto make up the difference, even if they disposed to help out at thispoint, which they decidedly are not.

My understanding is ESPA Executive Director Alan Van Capelle ispushing very hard for a vote, arguing that his community hasexperienced far too many broken promises and needs to see some movement, even if the bill dies.

The Gill Action Fund, on the other hand, wants a win and is arguingagainst a vote if all it will be is a symbolic victory. Sen. Tom Duane,the bill's prime sponsor, is siding with Gill on this one.

The fact that Van Capelle very publicly called Duane out at ESPA's fall dinner recently has not helped matters.

Further complicating things is the animosity between Paterson andthe Senate Democrats, who don't want to give the governor a win on thisissue – even if they might want to deliver for their LGBT allies, whospent more than $1 million in 2008 to help them take the majority. Other senators at the meeting: Conference Leader John Sampson, EricAdams, President Malcolm Smith, Jeff Klein, Eric Schneiderman."

Watch the scene at the state house plus a short interview with Ruben Diaz Sr, appearing to deflect fault over marriage equality to NYC Mayor Michael Bloomberg, AFTER THE JUMP…