Ted Haggard is back in the church business: 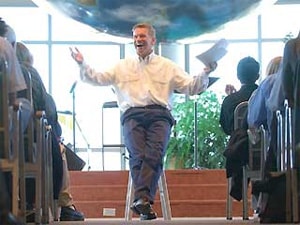 "Haggard will hold his first gathering at 7 p.m. Nov. 12 at his house at 1865 Old Ranch Road. He referred to it as a 'prayer meeting,' but said it would also be correct to call it a church. The gathering will include music and an offering to New Life Church. Haggard also will give a talk about the power of prayer.

Although Haggard said just recently he had no plans to start a church, he changed his mind two weeks ago after talking to a friend in Florida who was involved in prayer meetings.

Haggard anticipates that 10 to 20 people will show up, and said he has no expectations of building his new enterprise into something on the scale of New Life. 'For this prayer meeting, I have no goals,' he said. 'I have no secret hope that more people will come. I am not driven as I was. Before I focused on the Great Commission. Now I focus on helping other people.'”