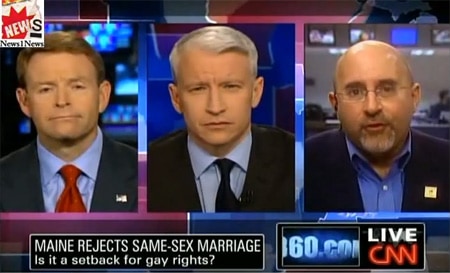 Tony Perkins of the Family Research Council and Evan Wolfson of Freedom to Marry joined Anderson Cooper last night to discuss the marriage defeat in Maine.

WOLFSON: Well, whathappened is it's very difficult for a minority to persuade a majorityto stop discriminating. And we came very close to persuading people inMaine to uphold the freedom to marry but didn't reach everybody inparticularly the more rural corners of the state with theconversations, with the personal stories, with the making it real thatwe need to do in order to move hearts and minds. And we need to keepdoing that work.

PERKINS: Well, this is unique, Anderson.This was the 31st state where voters have had the chance, they havestood for traditional marriage. But what's different here isyou had a legislature that had special interest money come in, makesome moves in the legislature. The legislature then created same-sexmarriage. The first time we've had a legislature create it, followed bya vote of the people that have repudiated what the legislature did. That's very significant, because this law had been passed. It was in acompletely defensive posture, they had to go out and work to overturnwhat the legislature had done. That's significant. And also, it'ssignificant, because I can imagine as a former legislator what some ofthe conversations were in Maine today. These legislators whovoted for this and in their districts, the voters went to the polls andoverturned it. There's now an infrastructure there and there could besome political fallout to this.