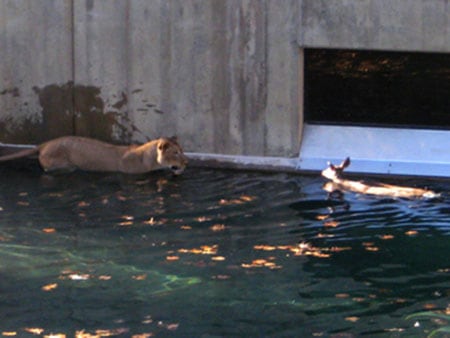 It was like Kruger National Park for a short while at the National Zoo in Washington D.C. on Sunday afternoon when a wild deer from Rock Creek Park leapt over the zoo enclosure into the lion exhibit.

While zoo visitors shrieked, the deer leapt around the enclosure, seeking safety in the moat.

NBC reports: "Zoo keepers got into the exhibit and were able to get the lions back inside the lion house. By that time, the deer had taken shelter behind a tree, according to Pamela Baker-Massan, a spokeswoman for the Zoo.Zoo police cleared visitors from the area and the zoo's vet staff went in, sedated the deer and took it to an animal hospital to be treated for injuries Baker-Massan called serious..The whole ordeal lasted about 45 minutes, according to Baker-Massan, who said it's the first time she remembers a deer getting into a carnivore exhibit."

UPDATED: Sad. "Zoo police cleared visitors from the area and the zoo's vet staff wentin, sedated the deer and took it to an animal hospital. Its injurieswere too serious though and several hours later, after being examinedby Zoo experts, the deer was put to sleep." 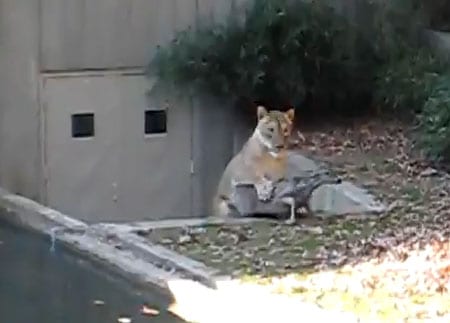