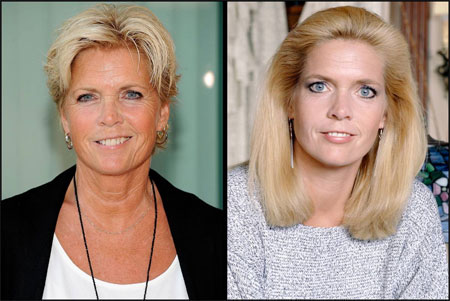 Family Ties mom Meredith Baxter (above, now and then), came out of the closet on the Today show following reports in the National Enquirer that she was spotted on a lesbian cruise in the Caribbean.

Watch the Today show clip, AFTER THE JUMP…

Said Baxter: "I am a lesbian and it was a later-in-life recognition. Some people would say, well, you’re living a lie and,you know, the truth is – not at all. This has only been for the pastseven years…I’ve always lived a very private life. To come out and disclose stuff is veryantithetical to who I am…I did not want some tabloid to take the story and make it up — I wanted it to be in my own words."

Baxter has been with her current partner, who is out, for four years. "I had to reach a level of comfort because it wasn’t fair to push herback into secrecy. We live very out lives in Los Angeles," said Baxter.

She also talked about telling her kids: "I said, ‘I think I’m gay,’ and my oldest boy said, ‘I knew.' The support from my family and anyone close to me has been soimmediate and unqualified. I’ve really been blessed."

Meredith Baxter also appeared on Frank DeCaro's Sirius radio show yesterday to talk about her coming out (scooping the Today show). Listen, AFTER THE JUMP…