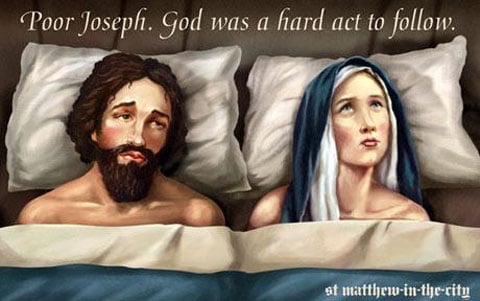 A billboard challenging the notions of God and Christmas which featured Mary and a glum-looking Joseph in bed was defaced within hours of being erected in Auckland, New Zealand.

The AP reports: "Church vicar Archdeacon Glynn Cardy said the billboard was intended
to challenge stereotypes about the way Jesus was conceived and get
people talking about the Christmas story. 'This billboard is trying to lampoon and ridicule the very literal
idea that God is a male and somehow this male God impregnated Mary,'
said Cardy, who described his church as having very liberal ideas about
Christianity. 'We would question the Virgin Birth in any literal sense. We would question the maleness of God in any literal sense,' he said."

Cardy added: "What we're trying to do is to get people to think more about what Christmas is all about. We
actually think God is about the power of love as shown in Jesus, which
is something quite different than a literal man up in the sky. One of the options we turned down had a sperm coming down with the words 'Joy to the World'."