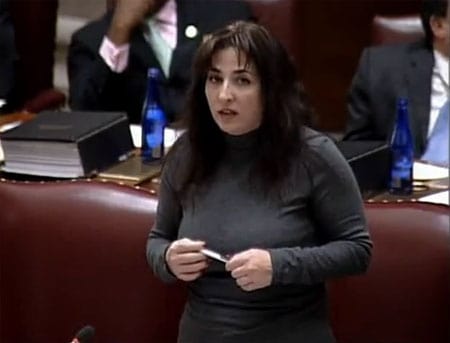 So, wow. A very moving and funny and sensible speech.
Well, as impressive as people may have found my floor comments, they were not persuasive. We knew going into it that this was a long shot. I felt we were counting votes that were probably not there, and unfortunately, that's what happened.

Hmmm. So it was funny because, under your speech posted online, people commented like, "Oh I didn't know there even were cool people like Diane, or even Democrats, from Staten Island." How does that sit with you?
Staten Island has a reputation as being a very conservative place, bedrock Republicanism, but the truth is, that's not been the case for quite a while now. We have an openly gay elected assemblyman, Matt Titone. The place has doubled in size the past twenty years, with more people having moved there from the other boroughs. I grew up in Queens — Astoria — and I moved there as an adult because I wanted to buy a house and couldn't afford a house in Queens. It's in an area called Fort Wadsworth.

So a lot of gays will now be calling you fierce, and that's a good thing!
So I'm told.

Who's your best gay friend?
Matt Titone! We've been friends about five years. And he has a partner, Josh, and they have a wonderful relationship, together fourteen or fifteen years now. And they are married in every sense of the word but the legal one.

Are you the type who says you won't get married till your gay friends can get married, too?
No. I think the likelihood is that they'll get married before I do.

Read more of the interview at NY Mag…

Watch Savino's testimony, if you missed it here earlier, AFTER THE JUMP…