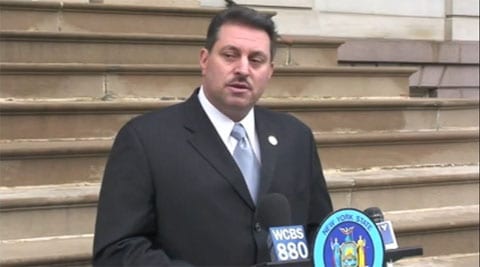 Democratic State Senator Joseph Addabbo BS-ed his way through a press conference at City Hall today regarding when asked about his "no" vote on marriage equality.

Coming early on in the roll call, Addabbo has been seen as the first defector who began the domino effect of "no" votes on the marriage bill. Addabbo insisted that despite his placement early on, he could not have been a leader.

Addabbo said he voted "no" because of his constituents: "To this day, I have kept my personal belief out of it, and it's still personal…It's still a personal belief. It's my belief. But again, it's only my belief. I voted, again, the will of the people in my district."

Asked if the vote goes against his record in the city council, Addabbo added:

"Not at all. Here I truly represented equal rights for all. I still do. You know. But this transcends the idea of equal rights. We could talk about marriage equality on different levels. We could talk about it on a morality level, a religious level, a civil rights level, so there's many levels to that one issue of marriage equality, unlike what we voted on here. So those were totally different issues. And I am proud of the votes here…The fact that the Republicans all voted 'no', and the fact that there were so many Democrats who voted no. There is no way in my estimation, in my opinion, that I could have been a leading, or guiding, or influential vote, even so early in the roll call."

UPDATE: Here, too, is Brian Lehrer's interview with Addabbo on WNYC. Lehrer notes our characterization of Addabbo's vote as "heinous." Listen here: