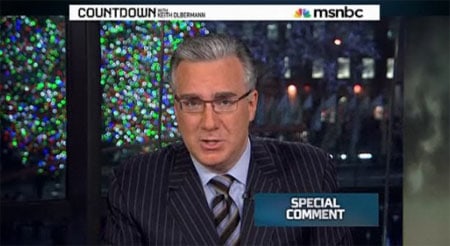 I haven't posted one of Keith Olbermann's Special Comments since before the election, but his comment from last night was especially on and searing. On health care reform, Lieberman, and Obama's weakness:

"They say they have done what they have done for the most important, the most fiscally prudent, the most gloriously phrased, the most inescapable of reasons. But mostly they have done it for the money. Lots and lots of money from the insurance companies and the pharmacological companies and the other health care companies who have slowly taken this country over.Which brings us to Mr. Lieberman of Connecticut, the one man at the center of this farcical perversion of what a government is supposed to be. Out of pique, out of revenge, out of betrayal of his earlier wiser saner self, he has sold untold hundreds of thousands of us into pain and fear and privation and slavery — for money. He has been bought and sold by the insurance lobby. He has become a Senatorial prostitute. And sadly, the President has not provided the leadership his office demands."