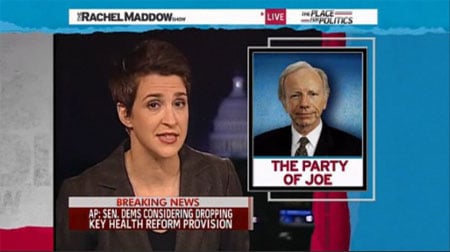 Reports of White House pressure on Harry Reid to make a deal with Joe Lieberman are apparently true: Lieberman, Reid, Obama, and reconciliation….

The NYT: "Just the thought of Joseph I. Lieberman makes some Democrats want to spit nails these days. But Mr. Lieberman, the Connecticut independent, is not the least troubled by his status as Capitol Hill’s master infuriator — and on Monday he showed how powerful that role can be at a time when Democrats cannot spare a single vote."