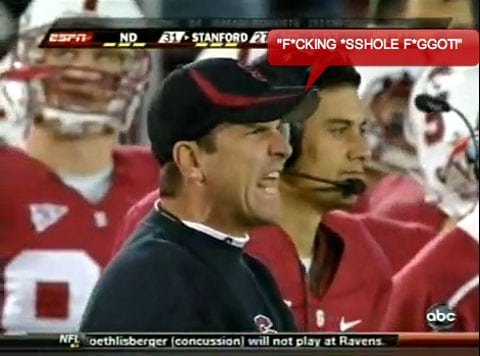 You may have heard that Broncos head coach Josh McDaniels was reprimanded and apologized for his use of the phrase "mother f*cker" during a Thanksgiving night game against the Broncos.

What, then, of Stanford coach Jim Harbaugh's swear word and slur-laden tirade against referees in Stanford's game against Notre Dame on Saturday, which though not totally audible were clear enough to be picked up by our YouTube tipster Chris and include a bunch of naughty words capped with the slur you see above in the image.

If players aren't excused for using homophobic slurs, coaches shouldn't be either. Or are the PAC 10 and the NCAA not as concerned about such language as the NFL?

Imagine if he'd used the N-word and ask yourself if people would get fired up about it.

Read Harbaugh's lips, AFTER THE JUMP…