Haven't had a chance to discuss this the past few days, but it's coming down to the wire. 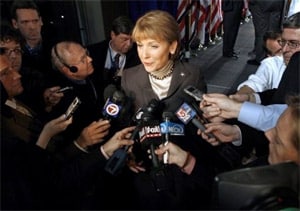 Republican Scott Brown, a former nude Cosmo centerfold, is running a too-close-for-comfort race against Democrat Martha Coakley for Ted Kennedy's Senate seat. The special election is a week away: "The winner of this race will be the deciding vote on the Democraticlegislative agenda: health care reform, immigration, and all of theupcoming LGBT bills — ENDA, DADT repeal, and the Uniting AmericanFamilies Act."

The Washington Post reports: "GOP excitement was fueled in recent days by the latest polls in the race. Two automated polls — a controversial methodology — showed the contest within single digits, and a Boston Globe poll released Sunday showed Coakley and Brown tied among those "extremely interested" in the race. Although Coakley carries a sizable 15-point advantage in the Globe poll, and leads on most issues, special elections are low-turnout affairs and are notoriously difficult to poll accurately, allowing both sides to spin the numbers.Sensing opportunity, national Republicans are beginning to mobilize. The American Future Fund, an independent conservative group, is spending more than $400,000 on ads slamming Coakley on taxes, and sources familiar with the organization say there's more where that came from." 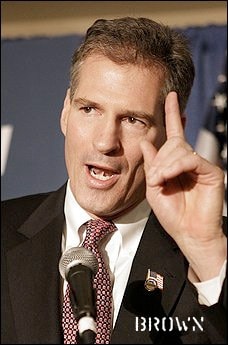 In a poll of residents who planned to vote in the special election —which occurs Jan. 19 — Public Policy Polling found that 48 percent saidthey intended to vote for Brown, while 47 percent said they would votefor Coakley. Six percent of responders said they were undecided. Dean Debnam, president of Public Policy Polling, said in a statementthat the poll shows the special election is “shaping up to be apotential disaster for Democrats.”

“Martha Coakley’s complacent campaign has put Scott Brown in asurprisingly strong position and she will need to step it up in thefinal week to win a victory once thought inevitable,” Debnam said.

Public Policy Polling’s poll speculated that Brown found strongsupport in an overwhelmingly “blue” state because of depressedDemocratic interest in the election and because he’s favored byindependent voters.

The poll could be an outlier. Another poll conducted by theUniversity of New Hampshire Survey Center and published Sunday by theBoston Globe found Coakley had a 17-point lead over Brown. Fifty-threepercent of responders said they would vote for her, while 36 percentsaid they intended to vote for Brown.

John Kerry has launched a last-minute fundraising push for Coakley. The Stonewall Democrats are raising money for Coakley. You can contribute HERE.

The race has inspired a flurry of recent ads which are getting attention. One from Coakley, paints Brown as a "lockstep Republican" and "highlights an amendment that Brown filed in 2005 that in certain caseswould have allowed doctors to deny emergency contraception for rapevictims."

Watch that ad, and Brown's response ad, plus a moment from last night's debate between the candidates, AFTER THE JUMP…