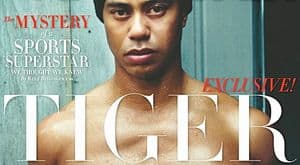 "One of Tiger's many mistresses, Loredana Jolie Ferriolo, is penning a tell-all book about the golf ace and claims that she witnessed him in gay encounters. RadarOnline.com has learned exclusively that Loredana has claimed she saw Tiger having sexual relationships with other men. That shocking twist is something no other mistress has claimed and there has been no proof.

But Loredana recently attempted to sell her story for $1 million and graphically described group sex that included incidents of Tiger with other men, RadarOnline.com has learned exclusively.

Loredana says she is planning to spill all about how she and Tiger 'came about, his healthy appetite for arranged sex, threesomes, girls next door, girl-girl, and an answer to all the rumors surrounding Woods' sexuality.'"

Ok, let's see – she "has claimed" something "no other mistress has claimed" and there's "no proof", but she has cred because she "attempted to sell her story for $1 million" so she is "planning to tell all".

And by the way, she's still trying to sell it. "That hint about Tiger's sexuality is the key to Loredana's hopes for making a seven-figure deal, no matter how unlikely that seems."

Sounds solid to me!