It's hard to believe Bill Gates isn't familiar with the Draconian Uganda "kill the gays" bill, but in a new interview with the Seattle Times, Gates essentially brushes it off: 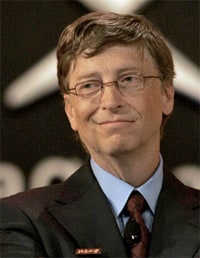 Q: Looking at health efforts in Africa, such as HIV prevention and treatment, are you concerned about the Ugandan anti-homosexuality bill, and have you spoken to anyone there about it?

A: The spread of AIDS is a huge problem and obviously we're very involved. I talk in my letter about the great success with this male circumcision effort, and preventative drug trials. There's a tendency to think in the U.S. just because a law says something that it's a big deal. In Africa if you want to talk about how to save lives, it's not just laws that count. There's a stigma no matter what that law says, for sex workers, men having sex with men, that's always been a problem for AIDS. It relates to groups that aren't that visible. AIDS itself is subject to incredible stigma. Open involvement is a helpful thing. I wouldn't overly focus on that. In terms of how many people are dying in Africa, it's not about the law on the books; it's about getting the message out and the new tools.

Think Progress notes: "The bill has been strongly condemned internationally and should be especially troubling to Gates because it 'in effect bans organizations working in HIV and AIDS prevention,' which it considers 'promotion of homosexuality.' The U.N.’s Special Envoy for AIDS in Africa blasted to legislation, saying, 'The law will drive [patients] away from seeking counseling and testing services.'” AIDS activists in Uganda and the U.S. have protested the bill, and the U.N. has threatened to scuttle plans to build an AIDS research center in Uganda if the bill becomes law."