The Stand 4 Marriage DC Coalition has asked the D.C. Superior Court to order the Board of Elections and Ethics to allow their "Marriage Initiative of 2009" on the ballot so they can begin collecting signatures. 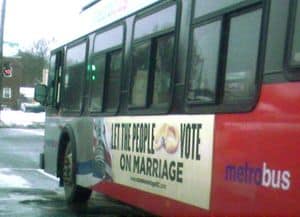 This was not totally unexpected, but the really vile part of the news is the 39 congressmen who have filed an amicus brief to stand by Bishop Harry Jackson and his gang of bigots:

D.C. Wire: "In the filing, U.S. senators James Inhofe (Okla.) and Roger Wicker (Miss.) and 37 House Republicans align with Bishop Harry Jackson, pastor of Hope Christian Church, in asking the court to reverse a D.C. Board of Elections and Ethics decision prohibiting the same-sex marriage question to be put before voters.

The filing comes as Jackson and his attorneys appeared in Superior Court today for a hearing on whether a referendum should be held. In two separate rulings since June, the elections board has stated that a public vote on same-sex marriage would be discriminatory against gay men and lesbians. Jackson is vowing an exhaustive court fight to challenge those decisions."

In addition to Wicker and Inhofe, House Minority Leader John Boehner (Ohio) and Minority Whip Eric Cantor (Va.), the brief was also signed by (via americablog):