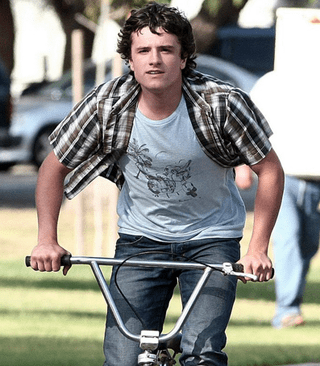 THE KIDS ARE ALL RIGHT
Laser and Joni have two mommies. Nic (Annette Bening) and Jules (Julianne Moore) are their loving highly verbal moms. The kids amusingly refer to them in the singular as in "moms won't be happy about that". Moms has been together for decades and the kids will soon leave the nest. This family has its quirks but it feels like a generally happy one. But something is eating at teenage Laser (Josh Hutcherson, pictured right) and he asks his older sister Joni (Mia Wasikowska) to help him meet their biological father, the sperm donor. This is where Paul (Mark Ruffalo) comes in. He's a Peter Pan type who has never settled down and gotten by on talent (he owns a restaurant) and sexual charisma. Before too long, he's met the kids and to his self-amusement and surprise instantly cares for them. He very rapidly becomes a kind of fifth wheel, welcomed by the kids, worrisome to the mothers.

That's the set up.

But the joy of watching The Kids Are All Right is to see both comedy and drama spring from inside of each of the five distinct flawed characters (we all have our issues) until it ricochets off of all of the others. Things get complicated and messy very quickly. Everyone gets hurt. Despite the escalating drama, the film's great charm lies in how breezy and laid-back it feels even when it's approaching all of this tension. If this movie were a person, it'd be someone you'd want as a friend, someone who can find the funny in dark moments and who'd have your back even when they're pissed at you. As sentimental as that sounds, the film earns the good vibes. Writer/director Lisa Cholodenko (who previously gave us High Art and Laurel Canyon) makes sure you love each and every character. Even Paul, who a lesser film would vilify for rocking the boat so carelessly, inspires affection and sympathy.

It's not much of a spoiler to tell you that the film ends with Joni leaving for college (since her imminent departure is what prompts Laser's plot-kickoff request). Wasikowska's final closeup is one of the most beautiful things you'll see in a movie this year. No matter how long it's been since you first left home, that flood of confusing exciting contradictory emotions will come rushing back to you, it's so accessibly written on her face. All credit to Lisa Cholodenko for making a film that is both recognizably gay and universal in its understanding of family. After all, gay or straight, every marriage has rocky patches, every family loves and aggravates each other and every new relationship can cause ripples in older ones. Eventually we all have to leave home… whether we have one mommy or two. 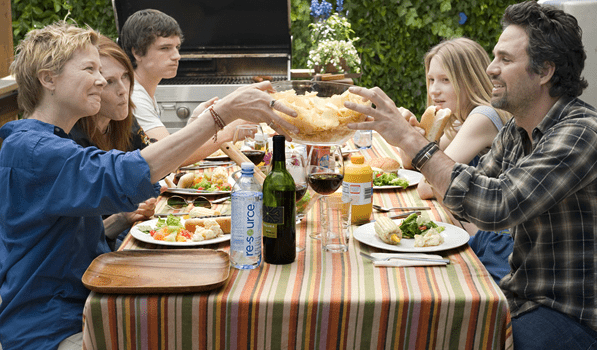 photo from Lisa Cholodenko's The Kids Are All Right (2010)

LIVE FROM SUNDANCE!
All apologies for my absence last week but I was en route to Utah for the Sundance Film Festival. Sponsorship issues truncated the usual partying at the Queer Lounge, but there was still plenty of gay (or gay interest) up on the screen. And plenty of good films in general. I missed Joan Rivers: A Piece of Work, but heard only good things about the documentary. I also skipped 8: The Mormon Proposition because just returning to Utah soil was painful reminder enough, thank you very much. Gender bending icon Tilda Swinton famously accepted an amusing offer from Movie|Line to play Conan O'Brien while she was visiting. She was here to promote the ravishing Italian film called I Am Love which, incidentally, has a lesbian subplot. There was also girl-on-girl action in The Runaways with Kristen Stewart as Joan Jett and Dakota Fanning as Cherie Currie. Journalists had to grill them on the kiss but it's actually one of the tamer scenes in this druggy wild grrl biopic. 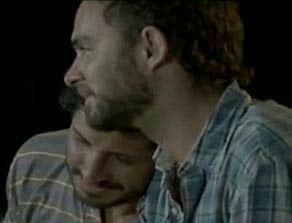 One of the festival's most moving entries was the Peruvian gay drama Contracorriente (Undertow). The setting is a small deeply religious seaside town. A local married fisherman, whose wife is about to give birth to their first child, is having an affair with a painter. The painter is out, not local, and the subject of curiosity and scorn in the tiny town he's inexplicably decided to stay in. He's only there for the fisherman, you see. At first Undertow feels like a mellow drama about the difficulties of closeted romance but halfway through a tragedy occurs offscreen and the film takes on greater resonance. The filmmakers have come up with a great metaphor for closeted feelings and the fisherman's journey towards honest selfless love provides teary catharsis in the end.

Much as I enjoyed several movies, I kept waiting for the true festival breakout. The one that prompts instant raves and bidding wars. To my happy surprise this year's breakout came from our team.

Read about The Kids Are All Right, AFTER THE JUMP…