Christine Quinn won re-election as City Council speaker in a 48-1 vote over opponent Charles Barron, in what the NYDN describes as a "racially charged" vote: 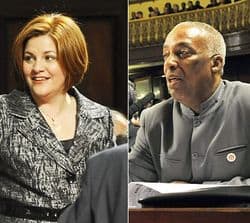 "A small group of Barron supporters shouted 'sell out' and 'Uncle Tom' as every member present except Barron – who nominated himself without a second – unanimously voted to give Quinn another four-year term. 'We owe it to our children to stand up like men and women and say our time has come,' said Barron, a former Black Panther and Brooklyn councilman since 2002.

The Council has a non-white majority for the first time, consisting of 27 members who are African-American, Latino or Asian and 24 who are white."

WNYC: "At a swearing-in event for the council and its new members, Brooklyn Councilman Charles Barron argued that he should be speaker. He said with the new council, in which minorities now outnumber whites, racial politics demand change. 'For us to be the new majority, and not a single black or Latino is in a powerful position in a citywide position, in this city, is unconscionable,' he said.

During the vote, Barron's supporters in the galleries shouted 'sellout' at black and Latino council members who voiced support for Quinn. Barron also argued that the office of speaker has too much power, but ultimately he wasn't able to get any votes except for the one he himself cast."

The NYT: "Ms. Quinn, who put aside her own plans to run for mayor when Mr. Bloomberg sought a third term, has about $3 million in her campaign treasury, making her a strong contender for his office in 2013.

She refuses to discuss it, saying that she is focused on a second term as speaker. But the issue is never far from her mind.' Would I like to go on in public life to greater heights?' she asked herself during an interview. 'Of course I would.'"