Maureen Dowd interviews Ted Olson and David Boies about the federal challenge to Proposition 8 in the NYT. Olson told her, "I think there’s something the matter with you if you don’t care enough
to feel the suffering that they’ve been through and if you’re not
emotionally upset about the fact that we’re doing an immense amount of
harm to people,” he said. “We’re not treating them like Americans.
We’re not treating them like citizens." And Boies took Obama to task for his pace on the issue: 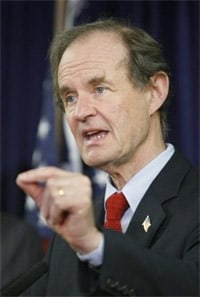 While Charles Cooper, the lawyer on the anti-gay-marriage
side, cited President Obama’s declaration that marriage should only be
between a man and a woman, Olson noted that Obama’s parents could not
have married in Virginia before he was born.

I asked the lawyers
if they were disappointed that the president who had once raised such
hope in the gay community now seemed behind the curve.

“Damned right,” Boies snapped. “I hope my Democratic president will catch up to my conservative Republican co-counsel.”

Olson added: “I’m not talking about Obama, but that’s what’s so bad
about politicians. They say, ‘I must hasten to follow them, for I am
their leader.’”

Obama sees himself as such a huge change that he
can be cautious about other societal changes. But what he doesn’t
realize is that legalizing gay marriage is like electing a black
president. Before you do it, it seems inconceivable. Once it’s done,
you can’t remember what all the fuss was about.