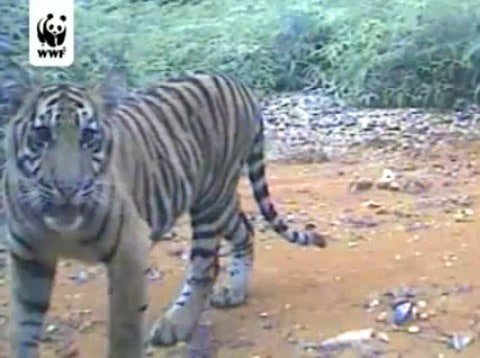 A video camera trap set up deep in the Sumatran jungle on a corridor known to be traveled by rare Sumatran tigers between two protected areas has captured the first-ever footage of a Sumatran tiger and her two, year-old cubs in the wild.

AP: "Ian Kosasih, WWF-Indonesia's forestprogram director, said the images showed the need to turn the corridorinto a protected area and for paper and palm oil companies in the areato shield what he called high-value forest under their control. 'Whenthese cubs are old enough to leave their mother, which will be soon,they will have to find their own territory,'' Kosasih said in astatement. 'Where will they go? As tiger (habitats shrank) with somuch of the surrounding area having been cleared, the tigers will havea very hard time avoiding encounters with people. That will then bevery dangerous for everyone involved.' Sumatran tigers are onthe brink of extinction because of rapid deforestation, poaching andclashes with humans."

Experts estimate there are only between 400-500 Sumatran tigers left in the wild.