Here's some clarification I received from Sue Fulton, Communications Director at Knights Out, the LGBT organization formed by Lt. Dan Choi, on yesterday's news that he's serving again. 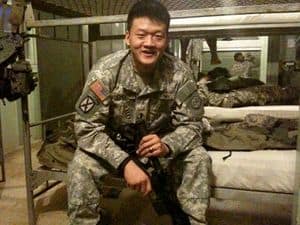 "Dan is a member of the New York National Guard. He appeared at a hearing where a board recommended he be discharged. That recommendation requires review and approval at higher levels. Dan's discharge has never been finalized.

After his board recommended discharge, Dan was not included in regular drill… until recently. This past week, his commander — who has always been supportive of Dan — contacted him to rejoin his unit in weekend drill.

This is not the same as 'active duty' — National Guard units CAN be activated, or called to active duty, but Dan's unit has not.

This is not a change in Army policy, nor any action from 'higher headquarters' that we are aware of. I would view it as a recognition by his unit that Dan's discharge may, after all, NOT be confirmed by the Army.
That said, Dan's unit welcomed him back, and he spent a very full weekend practicing Infantry tactics and lifesaving procedures with them. Dan has never lost the respect of his fellow Soldiers, even as an out Gay man, and he will continue to do his job as an Infantry officer for as long as he is allowed."

And Dan Choi himself writes: "I was never fully discharged and have been substituting drills
because of my schedule of lobbying and pushing for repeal. I attended
national guard duty this past weekend beacuse we needed to train on
critical skills for a
possible upcoming deployment. My discharge is still pending, but I have
returned to work  – and there are no instances of decreased good order
or discipline. I sleep in an open bay with little privacy. No issues.
Good to be back with my unit! – although I can still be fired at any
moment for DADT."