Former Secretary of State Alexander Haig has died at 85, the AP reports: 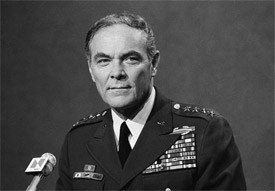 "Haig's long and decorated military career launched the Washington career for which he is better known, including top posts in the Nixon, Ford and Reagan administrations. He never lived down his televised response to the 1981 assassination attempt on President Ronald Reagan.Hours after the shooting, then Secretary of State Haig went before the cameras intending, he said later, to reassure Americans that the White House was functioning.'As of now, I am in control here in the White House, pending the return of the vice president,' Haig said.Some saw the comment as an inappropriate power grab in the absence of Vice President Bush, who was flying back to Washington from Texas.Haig died at Johns Hopkins Hospital in Baltimore, where he was surrounded by his family, according to two of his children, Alexander and Barbara. A hospital spokesman, Gary Stephenson, said Haig died at about 1:30 a.m."

Haig died of complications from an infection, the family said.

Watch an AP report posted recently which reported Haig was in critical condition, which includes various clips, AFTER THE JUMP…