NYC Chinatown's Lunar New Year parade included gay groups for the first time: "Wearing rainbow bandannas, about 300 gays and supporters waved versions of the fish and the phoenix, traditional Chinese symbols for prosperity and renewal. They were joined by drummers and even a costumed tiger with its own rainbow armbands. 'We are ecstatic. It's a huge step forward,' said Irene Tung, 31, a spokeswoman for Q-Wave, which led the gay contingent." 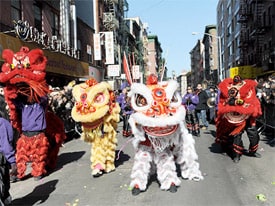 USA Today on gay life in mainland China: "Because many Asians live with their parents until they get married, it's often harder for them to lead openly gay lives. 'Maybe you can come out in your workplace, but not at home, so you get married,' says Zhang Beichuan, a professor at Qingdao University and an expert on homosexuality. China's one-child policy also puts pressure on gays and lesbians to have kids, because their families 'really care that they produce a child,' says Sun Zhongxin, who pioneered a 2005 course about homosexuality at Fudan University in Shanghai. The prevalence of double lives — by one measure, as many as 90% of Chinese gays marry the opposite sex, compared with a fraction of that in Western nations — has prevented true acceptance of homosexuality, some experts say."