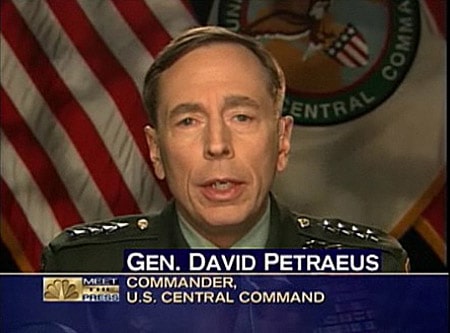 General Petraeus was asked about 'Don't Ask, Don't Tell' on Meet the Press and said he supports Gates' plan for a study but is saving his opinion on the DADT repeal for testimony in front of Congress:

"The U.S. commander overseeing troops in Iraq and Afghanistan says he's not sure that troops in the field care about the sexual orientation of fellow service members. Petraeus says he's served alongside gays and lesbians, and what matters are someone's skills and smarts…Advocates for a quick repeal have said the yearlong review is a stalling tactic. But Petraeus says it's a good idea to look at potential problems.He wouldn't give his personal opinion on whether the ban should be lifted. He says he'll do so when he testifies to Congress in the spring."

Previous Post: « DADT: Service Chiefs to Testify on Capitol Hill This Week
Next Post: Betty White on Verge of Signing to Host SNL »