Sports blogger, author, and UMass professor emerita Pat Griffin reports that the NCAA's website is running ads (current ad pictured here) for anti-gay, anti-choice evangelical organization Focus on the Family, and has approved airtime for them on CBS during the upcoming tournament. 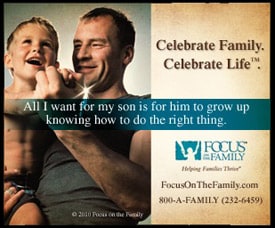 The ad deal is not confirmed, but the report is troubling, considering, as Griffin also notes, "The NCAA is the most prominent national governing body for intercollegiate athletics for women and men. The NCAA constitutional principles include an explicit prohibition on discrimination based on sexual orientation."

A Facebook group has been started by Sean Chapin urging the NCAA to drop its relationship with FoF. Join it here.