Earlier this month I reported that GOP House lawmakers in West Virginia were planning a "drastic" parliamentary move to force votes on a constitutional amendment banning same-sex marriage. Looks like it could happen this week. 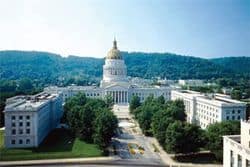 "House Republicans plan a series of procedural motions this week to force floor votes on proposals they say Democrats have allowed to die in committees. Those include a resolution (HJR5) that calls for a statewide referendum on whether to amend the constitution to define marriage, and a proposal (HJR104) to boost tax breaks for elderly and disabled people."

A move to force the tax measure failed on Monday.

Democrats suggest the Republican plan is nothing more than a waste of time and an attempt to score political points.

'The Republicans only seem to want to score election year points by trying to force debates and votes on issues like gay marriage,' state Democratic Party chairman Nick Casey said in a statement. …But Republicans contend the ban on gay marriage and the homestead exemption are serious issues that need urgent action.

Armstead said he wants to keep West Virginia from going through what California went through when a court legalized gay marriage."