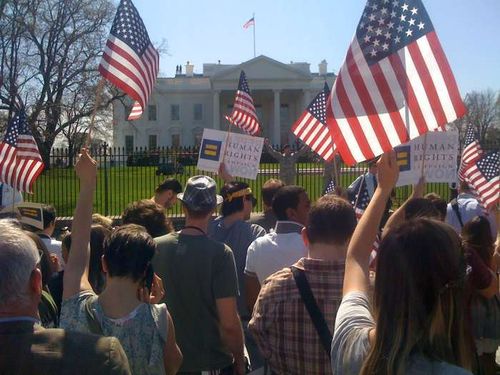 While different versions of events are being offered (see bottom of post), Lt. Choi spoke at the rally and asked participants to join him on a march to the White House. Choi led hundreds of people from the rally to the White House where he and Cpt. Pietrangelo cuffed themselves to the fence while the crowd rallied around them. Shortly thereafter Choi and Pietrangelo were cut from the fence and arrested by police. During the minutes leading up to their arrest, activist Robin McGehee of GetEQUAL was also arrested.

Kerry eleveld of the Advocate reports, in a Tweet, that Choi and Pietrangelo are being held in jail overnight and will appear tomorrow in court:

NOTE: The following post was constructed as it happened, mostly via Twitter, which gives it its "timeline" form and somewhat disjointed narrative.

According to Tweets from Robin McGehee at GetEqual (see stream below) reporting from the Kathy Griffin – Human Rights Campaign "Don't Ask, Don't Tell" rally, McGehee, who is traveling with Lt. Dan Choi, asked Human Rights Campaign President Joe Solmonese if Choi could speak at the rally and he rebuffed her, telling her it was Kathy Griffin's rally.

McGehee is the co-director of the National Equality March and the organizer of the Meet in the Middle 4 Equality rallies in California. 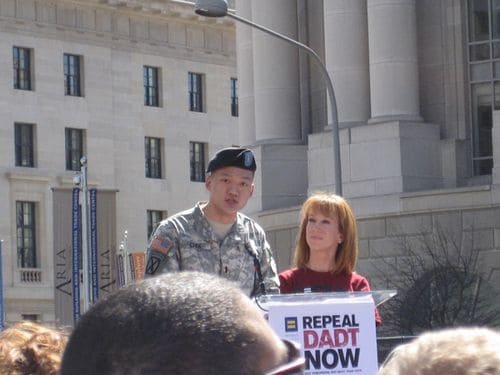 Choi took the stage anyway, told Griffin "Don't Ask, Don't Tell" is not a joke, and announced that he was marching to the White House. Choi then began leading hundreds to 1600 Pennsylvania Ave. 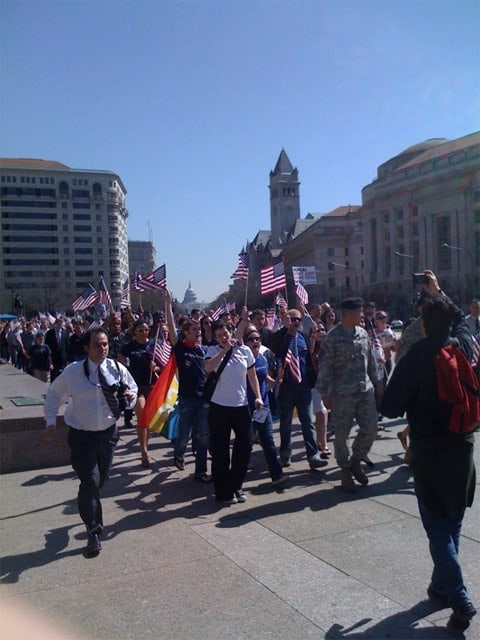 12:50 pm: Reports are now coming in that Choi has chained himself to the White House fence.

"Until we have full equality," Choi reportedly says.

Choi and Captain Jim Pietrangelo are reportedly both handcuffed to the White House fence. 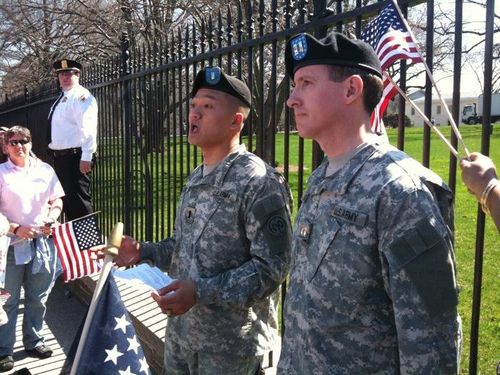 1:10 pm: According to DC Agenda's Tweet, "Yellow police tape is being put up around Dan Choi, and Secret Service agents are standing with him. Choi remains chained." 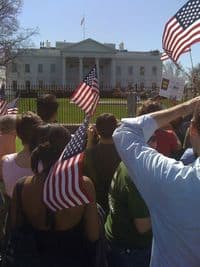 Approximately seven Secret Service Agents are inside the tape with Choi.

Reportedly one woman has been arrested, and is being identified by DC Agenda as the co-chair of GetEqual – which would be Robin McGehee.

1:21 pm: According to D.C. Agenda, police are not attempting to disperse the crowd and 20 Secret Service are on the scene. A crowd of 50 is chanting "Keep your promise, Obama" and "Repeal DADT".

1:27 pm: DC Agenda reports that there appears to be a stand-off between Choi and security. No effort is being made to arrest him.

1:37 pm: DC Agenda reports that people have been directed to stand at Lafayette Square. Two Secret Service officers are speaking with Pietrangelo and Choi, and it's not clear what's happening.

GetEqual's Robin McGehee was the woman arrested, it is confirmed. According to @MichaelsThought on Twitter, McGehee was shouting, "Get equal! You want your rights?! The fight for them!" 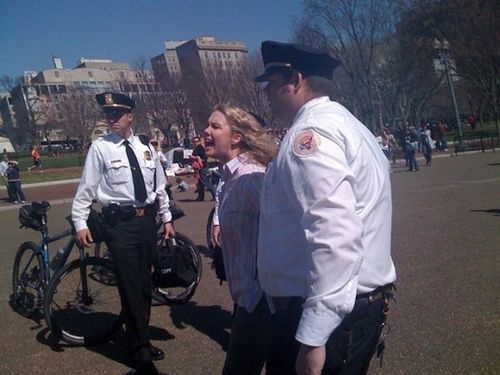 And here's a photo of Robin McGehee being arrested: 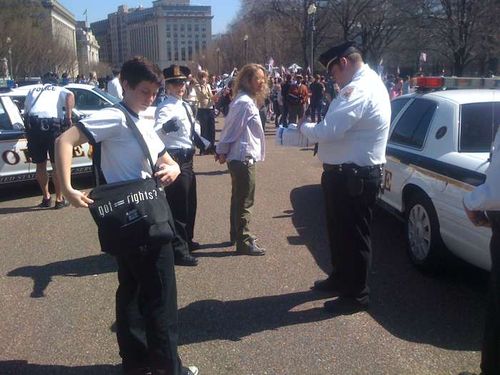 1:44 pm: DC Agenda reports a female woman "is kneeling in the crowd with hands raised, praying for the souls of gay people."

Here is the first video posted of the crowd:

Here's what Dan Choi said at the rally – HIS REMARKS – right before he took the crowd on the march to the White House. 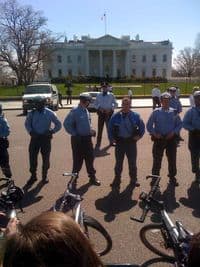 1:48 pm: Joe Sudbay at Americablog reports via Twitter that the crowd in front of the White House is growing.

1:55 pm: Police just informed the crowd that everyone must leave the sidewalk in front of the White House or be arrested, according to MetroWeekly. Choi and Pietrangelo are the only two remaining.

1:58 pm: Lt. Dan Choi and Captain Jim Pietrangelo have been removed from the fence and arrested.

2:02 pm: Choi and Pietrangelo get cheers from the crowd as they are put into police van. Crowd applauds them as heroes.

AmericaBlog has some great coverage from on the scene.

Tweets Michelangelo Signorile: "Dan Choi took HRC's and @kathygriffin 's celebrity photo op and turned it into a real protest at White House. And they stayed behind."

CNN and MSNBC seem to have totally ignored this protest. However, as the protest was happening, White House Press Secretary Robert Gibbs was holding a press conference in the Rose Garden. A reporter asked him if they were given a heads-up that there was civil disobedience happening outside.

Said Gibbs: "No heads up that I'm aware of, and I don't believe there's any meetings scheduled today."

2:19 pm: Kathy Griffin, who either disappeared or was advised not to follow Choi after the HRC rally, tweets…

Human Rights Campaign President Joe Solmonese was reportedly nowhere to be seen during the Choi action either.

HRC blogged about their rally late this afternoon, offering an explanation for why Solmonese and others stayed at the rally (was there any rally left after Choi departed?) and did not accompany Lt. Choi and Captain Pietrangelo to the White House:

"There’s been some confusion about Lt. Dan Choi’s role in the rally. As Joe Solmonese was walking to the stage, Lt. Choi asked Joe if he could have a speaking role. Joe explained that it wasn’t his sole decision to make on the spot given that there was already an established program that included Kathy Griffin, other organization and veterans. After Choi then spoke with Kathy Griffin, she agreed to bring him up on stage and speak to the crowd during her remarks.
Lt. Choi in his speech called on the crowd to march on the White House. Joe Solmonese along with Eric Alva and others felt it was important to stay and engage those at the rally in ways they can continue building the pressure needed for repeal. This does nothing to diminish the actions taken by Lt. Choi and others. This is the nature of social change and everyone has a role to play."

"That is simply untrue. I was there, standing next to Dan, about 10 feet from Kathy Griffin and Solmonese. They were behind a rope line, to keep them from the rally attendees. They looked over at Dan when he asked them, for the second time, to come with him to the White House (mind you, they had no idea that he was planning to handcuff himself), and they just stared back at him. They were not helping engage the rally about how to build pressure – the rally was over, they were already off the stage, behind it actually, getting ready to leave behind a secure rope line to separate them from the crowd. I'm sorry, but this statement is flat out untrue. They were getting their photos taken. Unbelievable."

ABC is one of the first MSM reporters to cover the story: "An Iraq war veteran and vocal opponent of the military’s Don’t Ask Don’t Tell policy was arrested by police officers after chaining himself to the front gate of the White House, in apparent protest of that policy."

BELOW: Robin McGehee's Twitter stream prior to her arrest, as the Choi White House action was getting underway: 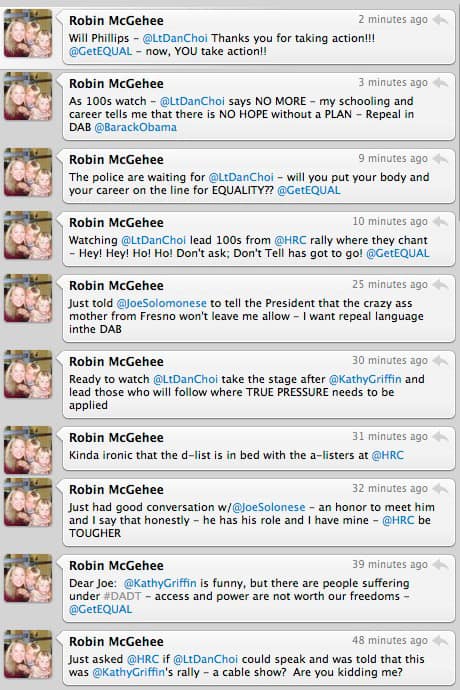