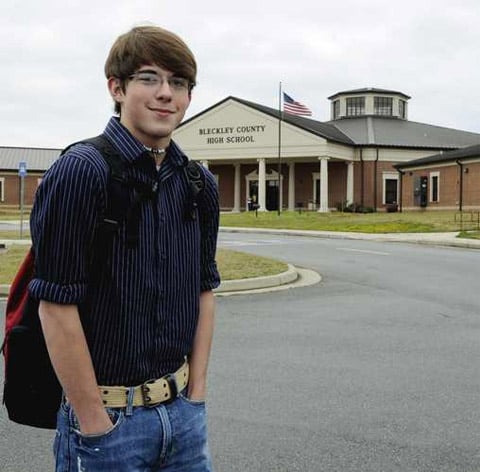 As it should be:

"After asking Bleckley County school officials permission in January to take another boy to the prom, [Derrick] Martin got word last week that his high school will allow it. Bleckley’s prom is April 17 in the high school cafeteria.
“I didn’t expect them to say yes. It’s who I am. I have the same rights,” he said. “It’s my senior prom and I wanted to be able to prove not everyone would cancel prom.”
Martin is an honor student who tutors at-risk elementary and middle school students after school. He also has a full scholarship to college. He said he knew the move would be controversial for the town of about 5,200 residents.
At his high school, prom dates from outside counties must be approved in advance, so Martin went to his principal and asked.
“At first she said no, Cochran wasn’t ready for it,” he said.
But then last week, school officials said they have no policy in place against it."

Even with permission granted, Martin still has concerns: "He worries about the attention that the prom 'walk through,' in which the school announces each senior’s name and the date’s name, will draw attention to him and his date.
'I’ll take out insurance on my tux,' he said, half-jokingly…The Cochran community said it’s surprising.
'I think a lot of people will stare,' said Miranda Taylor, an employee at a Wendy’s restaurant.
Security will be on hand at the dance, school officials said."

A brave kid. Good luck to him.