Reports are going around that Jake Gyllenhaal was involved in a scuffle over Heath Ledger in Montreal over the weekend. The truth appears to be that Gyllenhaal had a blogger from DrunkenStepfather thrown out of a bar after the blogger harassed him, saying "Isn't that the guy who killed Heath Ledger?" 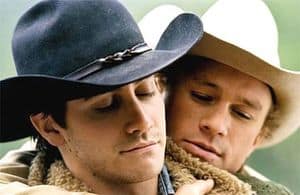 Blogger claims (site nsfw): "An innocent comment….that apparently he couldn’t take…so he took his acting class lessons seriously as he started screaming at chanelled the birthday he didn’t get the red bike-in my face like a role he rehearsed…he started throwing his hands in the air all while saying things like 'get the fuck out here' and 'I will break you' flailing his arms around like he meant business….but it was really a fucking joke…

I laughed but the bouncers didn’t so I got escorted out after I had to pay my bill…the girl I was with was stuck inside where Gyllanhaal decided to take out his anger on her….by pushing her into the table at least once before his crew held him back…..

Maybe these people aren’t used to being teased and everyone around them sucks up to them…so here he was shoving her against the table, hurting her, making her cry before his crew of handlers pulled him off her…"

E! Online clears it up: "Jake was definitely at the restaurant Saturday night (he's a regular there) as was the blogger. Main discrepancy here? We're told by sources who were present that the blogger in question said, 'Hey isn't that the guy who killed Heath Ledger?' prompting Jake to yell to the bouncers 'get these guys out of my face.'

The instigator and his crew were then thrown out.

We originally read this blog post yesterday, where the site definitely had 'killed' not 'kissed' up until it was later changed. The post actually backs up this supposed kill claim by ranting in the item that if Jake was Ledger's friend, he probably would have been there for him in his low point."

Previous Post: « Ann Coulter: ‘I’m the Victim of a Hate Crime’
Next Post: Gay Movies Can Now Be Screened in Malaysia, On One Condition… »