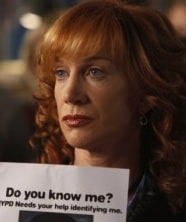 Kathy’s Griffin’s anticipated appearance on Law & Order SVU airedon NBC last night. In it, the funny lady guest starred as a lesbianactivist, a role which was apparently written specifically for her.

A scene in which Griffin leans in and kisses series regular MariskaHargitay was filmed but did not make the final cut. Instead, in thebroadcast version, Griffin’s character makes an attempt to kiss her, but Hargitay pulls back before their lips make contact and informs her that she’s straight.

What didn’t get cut was this comment which Hargitay makes to afemale character about to enter the room and find herself alone withGriffin:”If I were you, I’d stay outside.”

Watch the a clip of the final scene after the jump.