Magician James Randi, known as 'The Amazing Randi' to magic lovers and a frequent guest on the old Tonight Show with Johnny Carson, came out of the closet yesterday in a statement on his website: 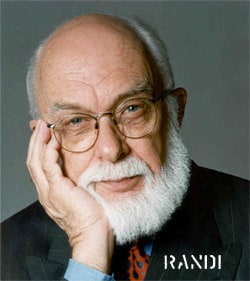 "Well, here goes. I really resent the term, but I use it because it’s recognized and accepted.

From some seventy years of personal experience, I can tell you that there’s not much “gay” about being homosexual. For the first twenty years of my life, I had to live in the shadows, in a culture that was — at least outwardly — totally hostile to any hint of that variation of life-style. At no time did I choose to adopt any protective coloration, though; my cultivation of an abundant beard was not at all a deception, but part of my costume as a conjuror.

Gradually, the general attitude that I’d perceived around me began to change, and presently I find that there has emerged a distinctly healthy acceptance of different social styles of living — except, of course, in cultures that live in constant and abject fear of divine retribution for infractions found in the various Holy Books… In another two decades, I’m confident that young people will find themselves in a vastly improved atmosphere of acceptance."

Randi was prompted to come out after seeing the film Milk:

"This declaration of mine was prompted just last week by seeing an excellent film — starring Sean Penn — that told the story of politician Harvey Milk, the first openly gay man to be elected to public office in California. I’m in excellent company: Barney Frank, Oscar Wilde, Stephen Fry, Ellen DeGeneres, Rachel Maddow, are just a few of those who were in my thoughts as I pressed the key that placed this on Swift and before the whole world…"