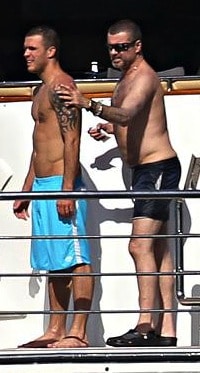 Students in Mead Valley California want to form a Gay-Straight Alliance at their middle school. Some parents aren't happy about this: "Brandi Estes is
among a group of perturbed parents planning to pass out fliers in hopes
of stopping the club. She said she has nothing against gays and
lesbians, but "how can a child 10 or 11 going into middle school decide
if he or she wants to be straight or gay?"

George Michael has been partying down under with a new boy: a rent boy.

"Ticked-Off Trannies with Knives" will still screen at the Tribeca Film Festival, despite GLAAD's recent finger-shaking.

Candy Crowley about anti-gay slurs shouted by teabaggers at the U.S. Capitol last week: "A CNN producer heard the word 'faggot' yelled at Barney Frank more than once in House Longworth Building."

Sounds like the guy who hacked into Britney Spears's Twitter account is making excuses: "I am not a hacker. I am a kind pirate. I did not act with a destructive aim… I wanted to warn them, to show up the faults in the system."

We've been reading about Derrick Martin for the past week. How have his his gay friends at school reacted to all of the media attention he's received? "He expected some of them to stand with him when he took his request to school officials. 'I thought I would have had a little bit of backup,' he said, disappointment creeping in his voice. But it’s just me.'”

Meanwhile, one of Martin's students explains why she's upset with his decision to bring his boyfriend to their prom and why she's opted out of attending: "It's not just his prom, but my prom, too, and everybody else's at school." 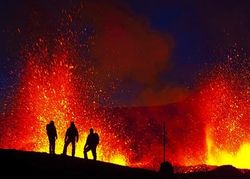 Rihanna's back-up dancers do the robot.

Rep. Anthony Weiner (D-NY): "Earlier today an envelope containing white powder and a threatening letter was delivered to my community office in Kew Gardens. The NYPD was immediately alerted and have responded appropriately by sending a Haz-Mat team."

A volcanic eruption can sometimes be a good thing: "A small Icelandic volcano that initially sent hundreds fleeing from their homes is turning into a boon for the island nation’s tourism industry, as visitors flock to catch a glimpse of the eruption."