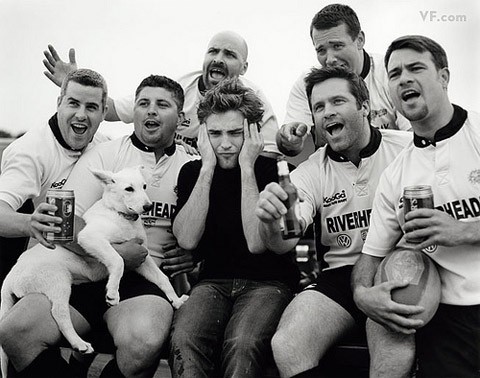 "Over the past 18 months, the actor has been linked to countless models and actresses, and recently appeared to confirm the rumours that he was dating Stewart, but then mysteriously claimed that he was 'allergic to vagina'. Er, what was that about? Is he dating Stewart then? Or is he, in fact, gay? I heard his two older sisters used to dress him up and call him Claudia when he was a boy.

Actually, he’s 'straight', he says. He found the male-on-male sex scenes he had to perform in a film, Little Ashes, last year 'strange. I played Salvador Dali. We were both straight, but he was Spanish, so much more confident about being naked and stuff, although when it comes down to it, it’s just as awkward with a girl, especially if you are straight and with a girl you don’t like… Anyway, Javier was really cool. After we had been pretending to have sex on this balcony in Barcelona, he was like, ‘We have such a strange job…’'"