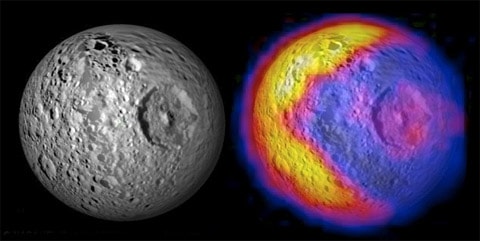 Forget the fact that Saturn's moon Mimas, because of an asteroid impact, already looks like the Death Star from Star Wars. Thermal images shot by the Cassini probe show a striking resemblance to Pac-Man.

More: "Mimas is only around 250 miles across. It has a distinctive scar called the Herschel Crater, which has led to many comparisons with the 'Death Star' from the Star Wars movies.

The Cassini team says the creation of the crater itself may have played a key role in the changing conditions across vast swathes of the moon's surface.

Its mission was recently extended until 2017.

Saturn has 62 moons with confirmed orbits. The largest is Titan, which is larger than the planet Mercury."

Previous Post: « Doctor Who Used ‘Shock’ Therapy to ‘Cure’ Gays Under Investigation for Sexual Assault of Dozens of Male Patients
Next Post: What the Fudge? School Production of ‘Scarface’ »