Dr. Aubrey Levin, a Canada-based doctor who worked in South Africa for years using "shock therapy" to "cure" gay conscripts, has been charged in the sexual abuse of a male patient, and dozens of others have come forward with similar allegations, the Guardian reports: 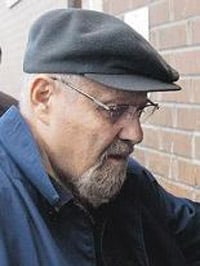 "Dr Aubrey Levin, who in South Africa was known as Dr Shock for his use of electricity to 'cure' gay military conscripts, was arrested after a patient secretly filmed the psychiatrist allegedly making sexual advances. Levin, who worked at the University of Calgary's medical school, has been suspended from practising and is free on bail of C$50,000 (£32,000) on charges of repeatedly indecently assaulting a 36-year-old man.

The police say they are investigating similar claims by nearly 30 other patients. The Alberta justice department is reviewing scores of criminal convictions in which Levin was a prosecution witness.

Levin has worked in Canada for 15 years since leaving South Africa, where he was chief psychiatrist in the apartheid-era military and became notorious for using electric shocks to 'cure' gay white conscripts. He also held conscientious objectors against their will at a military hospital because they were 'disturbed' and subjected them to powerful drug regimens.

South Africa's Truth and Reconciliation Commission heard that Levin was guilty of 'gross human rights abuses' including chemical castration of gay men. But after arriving in Canada in 1995 he managed to suppress public discussion of his past by threatening lawsuits against news organisations that attempted to explore it."

This guy is the definition of an evil sicko:

"Levin, who made no secret of his hard rightwing views and was a member of the ruling National party during apartheid, has a long history of homophobia.

In the 1960s, he wrote to a parliamentary committee considering the abolition of laws criminalising homosexuality saying that they should be left in place because he could 'cure' gay people…The treatment consisted of strapping electrodes to the upper arm. Homosexual soldiers were shown pictures of a naked man and encouraged to fantasise, and then the power was ratcheted up.

'It was traumatic. I could not believe her body could handle it,' she said later.

One gay soldier claimed to have been chemically castrated by Levin. The Truth and Reconciliation Commission was told by investigators that he was not alone. It also heard that at least one patient had been driven to suicide."