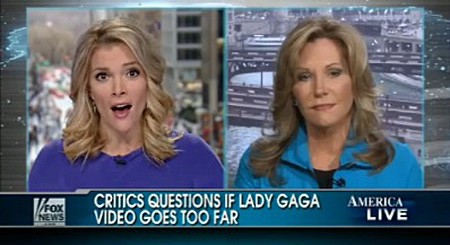 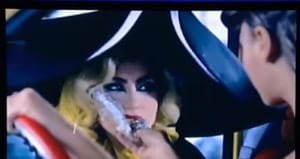 Says Rios: “And then we’ve got Beyonce and Gaga – gay, lesbian lovers? It’s disgusting Megyn…This is just poison for the minds for our kids, and for our minds for that matter.”

In related news, some in the transgender community are angry at Gaga too: “It seems with her latest video she’s continuing this gender essentialism, slipping in a ‘no dick = not a tranny’ joke at about a minute in, before the song even begins to play. The scene is set in a prison, and after being dragged to her cell and stripped by two women who appear to be trans Lady Gaga climbs up against the bars in a shot clearly designed to dispel any rumours. At that point one of the trans women guards says to the other ‘I told you she didn’t have a dick,’ and they walk away…That she’s using trans women and drag queens to exoticize her videos doesn’t defer from the cissupremacist stance that women = vagina, and trans women are therefore not real women. Her anxiety at being seen as trans is clear, and her response is typical of cis privilege and trans marginalization: We’re supposed to wipe our brows and sigh relief that she’s actually a real woman. This is transmisogyny.”