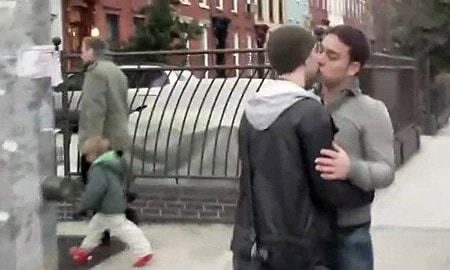 A group of gay activists held a "kiss-out" in the Carroll Gardens section of Brooklyn late yesterday afternoon near the spot where a man was brutally attacked by five men after leaving a gay event at South Brooklyn Pizza last week.

Groups of four couples stationed themselves on street corners in the neighborhood and kissed for 20 minutes.

Watch video of the kiss out, AFTER THE JUMP… 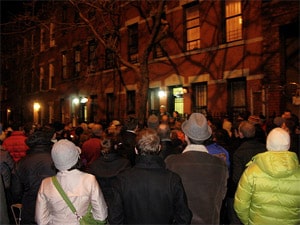 Carroll Gardens blog 'Pardon Me for Asking' has a report and slideshow on the vigil: "There was also an impressive police presence from the 76th Precinct. Captain Corey and members of the precinct's Community Affairs unit were there.The most moving speech was delivered by the victim's friend, who explained that the young man preferred to stay out of the spotlight and wanted to stay anonymous. He apparently is rather overwhelmed with the attention."

Watch video of the kiss out, AFTER THE JUMP…