This is pure nuttiness, via Media Matters: 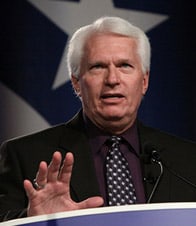 The infamously crude Bryan Fischer, who serves as Director of Issue Analysis for Government and Public Policy at the American Family Association, today wrote on his blog that America's military is run by "Fundamentalist Muslims and homosexual activists."

Bottom line: you want to know who's now running the U.S. Army, the U.S. Navy and the Marines and calling the shots where it counts? Fundamentalist Muslims and homosexual activists.

I'm sure that will come as news to those who actually run our military: Defense Secretary Robert Gates, Chairman of the Joint Chiefs of Staff Admiral Mike Mullen, and CENTCOM Commander Gen. David Petraeus.

Fischer was criticizing the military for disinviting Rev. Franklin Graham from a Pentagon ceremony celebrating the National Day of Prayer.