Bolivian President Evo Morales caused laughter to ripple through the audience at a conference on climate change on Tuesday when he suggested that eating hormone-injected chicken caused men to deviate into homosexuality, Spero News reports: 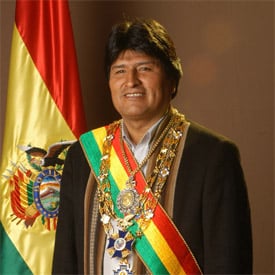 "[Morales] claimed that the presence of homosexual men around the world is a consequence of inadequate nutrition. According to Morales, this is due to eating chicken saturated with feminizing hormones 'The chicken that we eat is chock-full of feminine hormones. So, when men eat these chickens, they deviate from themselves as men.'"

Agence France Presse reports: "Spain's National Federation of Lesbians, Gays, Transsexuals and Bisexuals sent a protest letter to the Bolivian embassy of Madrid, calling Morales remarks 'homophobic.'
The president of Argentina's homosexual community, Cesar Cigliutti, said: 'It's an absurdity to think that eating hormone-containing chicken can change the sexual orientation of a person.' … 'By following that reasoning, if we put male hormones in a chicken and we make a homosexual eat it, he will transform into a heterosexual,' he added, in online comments."

According to Spero, "The conference was billed as the First Worldwide Peoples’ Conference on Climate Change and Mother Earth and organized by the South American nation’s government as defense of environmentalism. The conference assailed capitalism as an assault on Mother Earth, which many Andean peoples refer to as 'Pacha Mama.' According to Morales, genetically altered foods and Coca-Cola are 'symbols of capitalism.'"