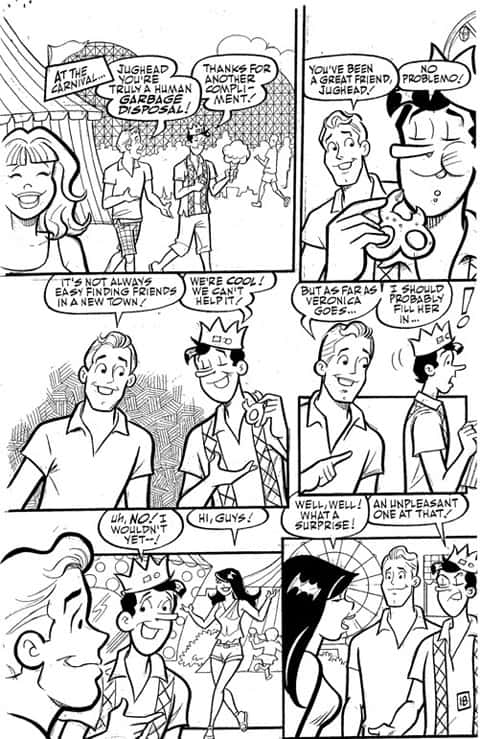 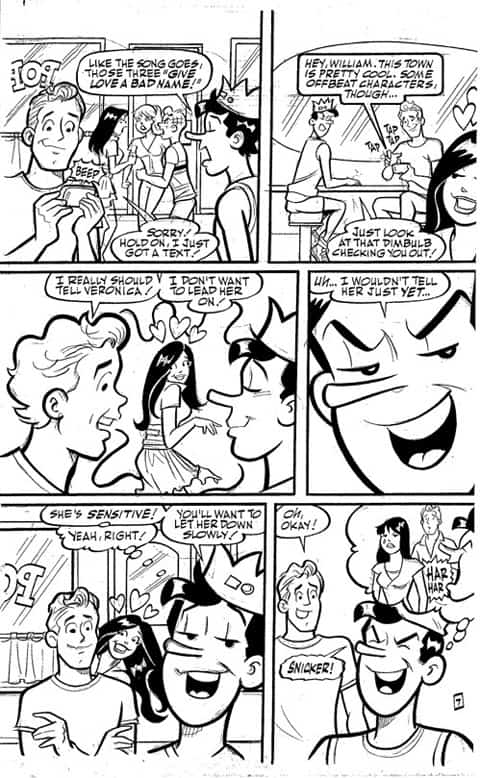 Yesterday I posted a video of Fausto Fernos speaking with Dan Parent, who has been writing and drawing the Archie comic series for two decades, speaking about the comic's introduction of its first gay character.

You can watch it again, AFTER THE JUMP…

Now, via Newsarama, are some strips from the comic, which is debuting on September 1, 2010.

Parent tells Newsarama that they've been introducing a lot of diversity into the comic recently, and finally came up with a storyline for a gay character: 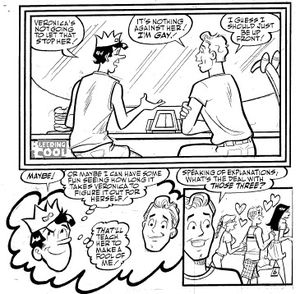 "In his introductory story, titled 'Isn't it Bromantic?,' Kevin's good looks get the attention of Veronica, who doesn't know he's gay because he's the new kid in town. Her thwarted attempts at winning his attraction amuse the other characters – particularly Jughead. 'They just like watching Veronica making a fool of herself, trying to get this guy to like her,' Parent said. 'At the beginning of the book, Kevin tells Jughead first that he's gay. And Kevin feels kind of bad and wants to tell Veronica why he's not interested. But Jughead keeps saying, 'No, you should wait to tell her,' because he's enjoying watching Veronica's antics.' Parent said the story works because it's wasn't something radical concocted just to introduce a gay character. 'The story is very much in the true context of our Archie stories,' he said. 'It's Veronica being Veronica. The fact that there's a gay character in the story isn't a big deal to the characters. We didn't do something with turmoil. The guy just happens to be gay, and the characters accept it, and that's it.'The longtime Archie cartoonist said Archie Comics wants to reflect what high schools are like in America, where being gay 'isn't a big deal anymore.'"

Much more interview at Newsarama.

Watch the video interview with Dan Parent by Fausto Fernos of FeastofFun.com and one more comic strip, AFTER THE JUMP…