Daniel Kowalski, a four-time Olympic medalist in swimming for Australia, came out of the closet today in a column in Australian paper The Age:

"Despite the dark, fearful and lonely times, being able to write this fills me with a sense of freedom, pride and relief. There truly is a genuine sense that everything will be OK.

I wrestled for a long, long time wondering whether being gay made me a bad person, but I can no longer fight who I am and that, simply put, is just me." 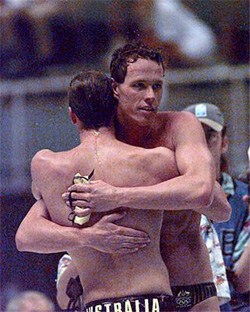 Kowalski said it has been difficult:

"Being a gay man with a foot half in and out of the closet is tough; the games it plays with your mind – and more importantly, your heart – are hard to put into words but I am going to try my best.

I finally accepted my sexuality at the end of 2006 following a huge anxiety attack at work. After what were literally years of torment, denial and very, very dark times, I couldn't live a lie to myself any more.

You often read that when people came out they had felt depressed or had suicidal tendencies. I, like them, experienced all of the extremes, but mostly it was the loneliness that was the hardest part of being gay – and still is.

The number of times I have sat on the couch or lain in bed bawling my eyes out, scared and fearful of the future, are too many to mention."

"I often think that if I had had people to look up to, to read about, who were elite athletes and were easily accessible – people who had lived some of my experiences as an athlete – then it would have helped the situation. It would have made it easier. But having lived it, I do understand why so few elite athletes have come out. In Australia, there have been Ian Roberts and more recently Matthew Mitcham…I recently read in The Sunday Age (''Stars of the AFL come out for gays'', 11/4) that the AFL, perceived as one of the last bastions of masculinity and homophobia, through its players association was taking a stance to stamp out homophobia by featuring some of its players in a series of campaigns.

This is a huge step and as a gay man something I am extremely appreciative of because at the end of the day this support, and in turn education, is what is needed."

Sounds like Kowalski needs some support. Now that he's living his truth, there's a much better chance he'll get it, and I hope he does.