Rush Limbaugh said "God may have replied" to the passage of health care reform with the eruption of the Iceland volcano. 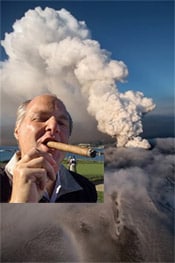 "You know, a couple of days after the health care bill had been signed into law Obama ran around all over the country saying, 'Hey, you know, I’m looking around. The earth hadn’t opened up. There’s no Armageddon out there. The birds are still chirping.' I think the earth has opened up. God may have replied. This volcano in Iceland has grounded more airplanes — airspace has more affected — than even after 9/11 because of this plume, because of this ash cloud over Northern and Western Europe. At the Paris airport they’re telling people to head to the train station to catch trains out of France, and when people get to the train station they’re telling people, “There aren’t any seats until at least April 22nd,” basically a week from now. It’s got everybody in a shutdown. Earth has opened up. I don’t know whether it’s a rebirth or Armageddon. Hopefully it’s a rebirth, God speaking."

So who'll be the first to blame it on gays?