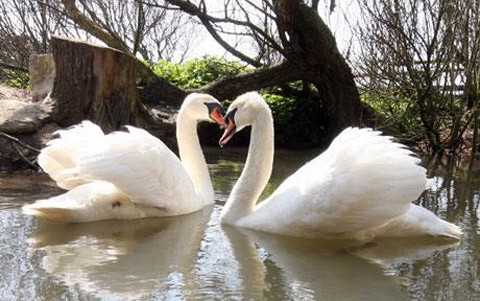 A pair of male swans have made a love nest in the UK:

"The pair show no interest in their female companions and only have eyes for each other. Dave Wheeler, from the swannery, said: 'The two birds both hatched in 2002 and are sort of together. "They have been together for several nesting seasons and basically keep territory as if they are a nesting pair.' The twosome flock together at the start of the nesting season in March and perform rituals associated with a breeding couple."

Said Manager of Abbotsbury Swannery, John Houston: "They sit on the nest and act in every way as if they were a pair expecting to lay eggs. It is quite sweet…They just always stay together and I hear that they have some spectacular fights with each other, but they always make up and get back together. We have more than a thousand swans here in the reserve and they are the only two doing this. We realised they were together because the swan herds can obviously tell the difference between the males and females as the cobs have a much larger bump on their nose. They are sexed and tagged at birth so we know from their rings that they are both male."