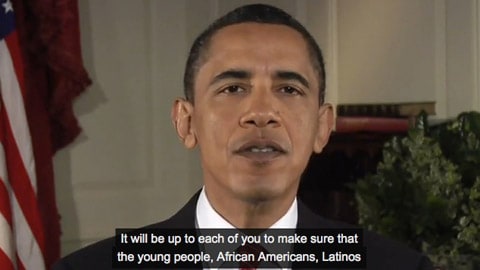 In new video taped on Friday by President Obama to coincide with an email blast to 13,000 people from DNC Grassroots project Organizing for America and DNC Chair Tim Kaine, LGBT people are conspicuously absent from a list of groups Obama is specifically counting on in 2010 Democratic reelection efforts. In the past, gays and lesbians have been included in lists such as these.

Says Obama in the video, in part: "So that's what we're going to do. … It will be up to each of you to make sure that the young people, African Americans, Latinos, and women, who powered our victory in 2008 stand together once again. … If you help us do that – if you help us make sure that first-time voters in 2008 make their voices heard again in November – then together we will deliver on the promise of change, hope, and prosperity for generations to come."